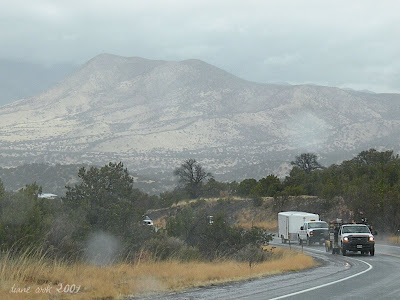 A girl from my part of Texas rarely sees peaks such as these. Coming out of the town of Ruidoso, on the way to Albuquerque, was so beautiful. The rain was a blessing, as they hadn't seen any precipitation in over 70 days. 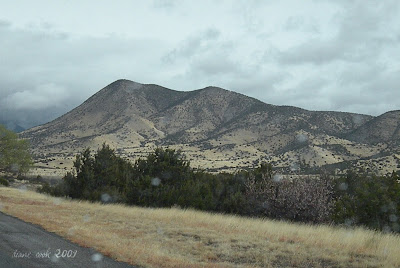 As the rain slowly stopped, we were able to see more of the Siarra Blanca mountain range. Then, we passed thru the Valley of Fires. 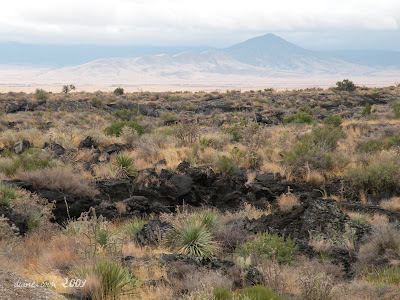 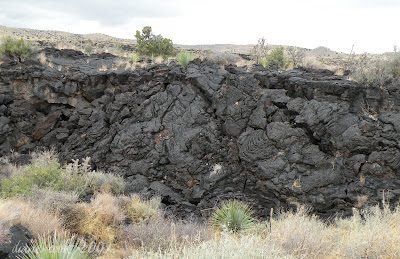 This valley has miles of buckled, twisted lava, that is said to be up to 50 meters thick and over 45 miles long. It originated from several volcanoes, including one vent now known as Little Black Peak. These fields are actually closer to a small town called Carrizozo. The lava is called the Malpais, which is Spanish for "badlands".
Then, we stopped by a trading post, chocked full of primitive decor. 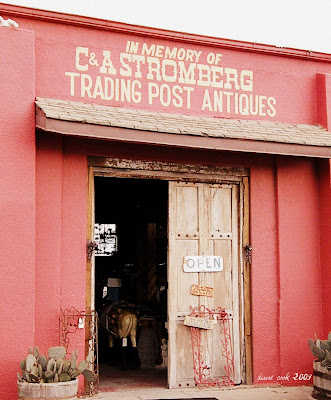 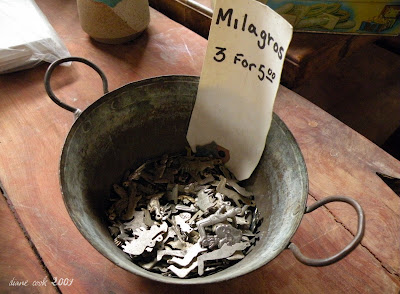 Everyone needs a milagro or two~or three. 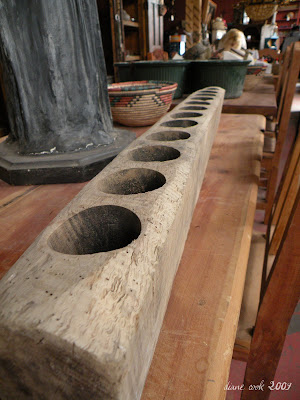 Look at the worm holes in this candle holder. I intended on buying it before I left, but completely forgot! Oh well, I will see plenty in a couple of weeks at the antique show in Warrenton. Now on to Corrales, where we will spend the night, before we head into Santa Fe.

oooo the mountains are BEAUTIFUL~ And I really wanted those milagros charms. I love seeing pics of your trip. Thank you for sharing Diane!

Very beautiful to my eyes. I have a strong attachment to this kind of topography. And to New Mexico!

Hi Diane, I am loving this visual journal you are doing. I feel like I am on an adventure with you! I would give my right arm (I'm left handed) to go to the Antique show with you coming up! Do post pics of your finds. Thanks for helping us visualize that fun trip to the Southwest.

I'm so pleased to know you enjoyed your time here in New Mexico.

I'm just a couple of miles from the Chocolate Turtle....drive by it all the time.

Bead fest is sure a fun experience.

I found you via Deryn.